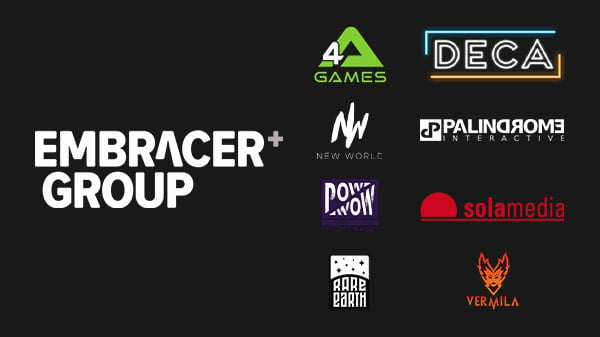 Here is an overview of each acquisition:

4A Games is the developer behind the Metro franchise and a long-term development partner to Embracer Group-owned publisher Deep Silver. The developer and its team of over 150 staff across its two studios in Malta and Ukraine join Embracer Group through its Saber Interactive label.

New World Interactive is the developer behind the Insurgency franchise. The developer and its team of approximately 40 staff in Denver, Colorado join Embracer Group through its Saber Interactive label.

New World Interactive will operate as an independent studio under Saber Interactive, and is currently working on an unannounced, new, owned intellectual property. It has also partnered with Saber Interactive for the console versions of Insurgency: Sandstorm expected to be released in the first half of 2021.

Pow Wow Entertainment is the developer behind the multiplayer action game Misbits. The developer and its team of 20 staff in Vienna, Austria join Embracer Group through its THQ Nordic label.

Pow Wow Entertainment is currently working on two unannounced games: one in an existing THQ Nordic-owned franchise and the other a roguelike multiplayer platformer set in a constantly changing world.

Sola Media is a sales agent of international film-and TV-rights, distributing children and family films across the globe. The company joins Embracer Group through its Koch Film label.

Vermila Studios is the developer behind the upcoming first-person horror adventure game Crisol: Theater of Idols. The developer and its team of 10 staff in Madrid, Spain join Embracer Group through its Amplifier Game Invest label.

Dragged Across Concrete ⋅ NEO: The World Ends With You announced for PS4, Switch ⋅ 14 minutes ago

Dragged Across Concrete ⋅ NEO: The World Ends With You announced for PS4, Switch ⋅ 15 minutes ago
Latest Open Forum