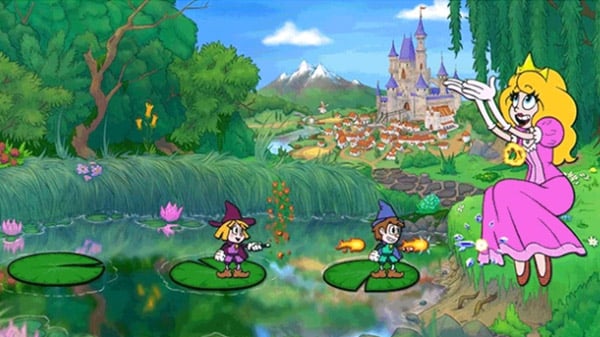 Xixo Game Studio has relaunched the Kickstarter campaign for Cuphead-like 2D platformer Enchanted Portals. It is seeking €120,000 in funding for release across PlayStation 4, Switch, and PC via Steam in October 2021.

This dimension and that one: they seem to flow into one another, parts of the whole that we call reality, yet there is a way to get stuck between them – and Bobby and Penny have found it. A couple of rookie magicians, they have just unwittingly entered into the adventure of their lives, and there is no telling where it will take them. Now, it is up to you to help guide them back to their own dimension, exploring a variety of wonderful worlds and fighting their way through an ensemble of wacky yet powerful bosses while trying to get the Magic Book back in their hands.

Featuring music sure to get stuck in your head, a charming old-timey art-style, and comedy from beginning to end, Enchanted Portals is a co-op 2D platformer at its heart – but a platformer in which there is always something different and exciting waiting around the corner. Whether you are playing alone or with a friend, the magic is nonstop in this game, and the action is both fast-paced and whimsical.

Enchanted is an intense 2d platformer game with battles versus crazy bosses.

If you missed it, watch the most recent trailer here.