Plus anything else you can Dream of. 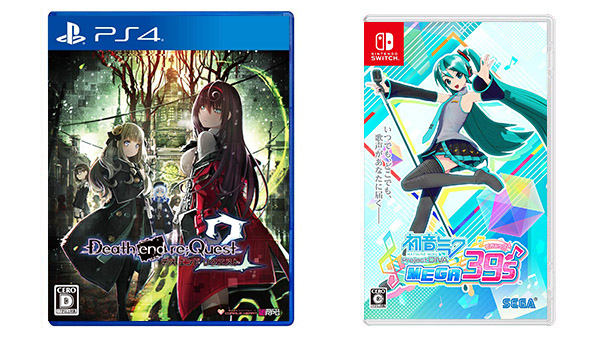 Death end re;Quest 2 for PlayStation 4 and Hatsune Miku: Project Diva MegaMix for Switch are the highlights of this week’s Japanese game releases.

A sequel to the April 2018-released PlayStation 4 RPG, Death end re;Quest 2 is set in Liz Soara, a fictional town themed after Southeastern Europe, where occult horror-related developments have been occurring. The real world setting of the story is the same as that of the first game, with characters from the first game also set to return. The battle system is turn-based and includes various unique elements such as the “Install Genre” system that changes the genre of battle. There is also an Ao Oni collaboration unlocked after clearing the game.

Hatsune Miku: Project Diva MegaMix is the first entry in the Sega-developed rhythm game series for Switch. It features 101 songs, including 10 newly recorded songs, over 300 modules (character costumes), and updated 3D character models with an anime-style touch. In addition to the standard Arcade Mode, there is also a new Mix Mode style of gameplay developed exclusively for Switch.

landlock ⋅ Rumor: Super Mario back catalog and several other Mario titles coming to Switch in 2020 ⋅ one minute ago

chizwoz ⋅ Rumor: Super Mario back catalog and several other Mario titles coming to Switch in 2020 ⋅ one minute ago