Jump-action game previously only available on iOS and Android devices. 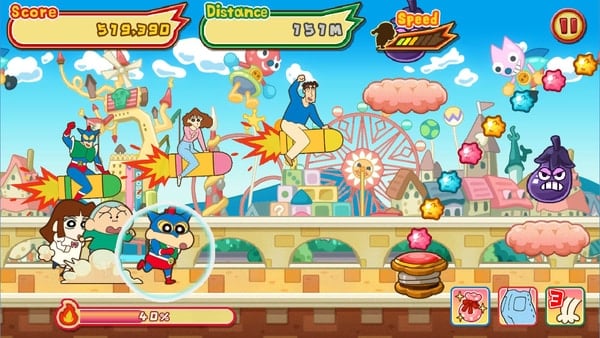 Bushiroad has released a Switch version of Crayon Shinchan: The Storm Called! Flaming Kasukabe Runner!! via the Nintendo eShop for $9.99.

Crayon Shinchan: The Storm Called! Flaming Kasukabe Runner!! was previously released for iOS via the App Store and Android via Google Play as a free-to-play title in May 2014 in Japan, followed by July 2016 in the west.

A jump-action Crayon Shinchan game that anyone can easily play!Collect various costumes and friends and run through the city of Kasukabe and the world of movies!

Everyone’s favorite five-year-old Shinnosuke makes a Fierce Dash to collect sweets and Golden Balls. Get lots of different costumes using Golden Balls, obtained by proceeding from one stage to another and completing special missions! Enjoy Shinchan and his friends wearing a variety of cosplay clothes, well-known to people familiar with anime and movies!